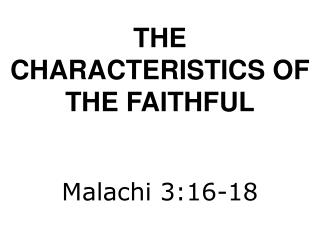 Characteristics of Faithful and Effective Visions - . ministry visions. articulate a discerned will of god clear concise

The Basics of Faithful Living - . we’ve recently examined “the basics” of the power of god’s word , repentance ,

Forming the Faithful - . visions of adult education. “good teachers meet learners where they are and help them go where

The Faithful Few - . malachi 3:16-18. the faithful few. who were they? a righteous remnant in the midst of apostasy and

Exhortation to the Faithful - . jude 17-19 but ye, beloved, remember ye the words which have been spoken before by the

The Faithful, Patient Lord - . revelation 3:14-22. the situation. city around since before 253 bc named after a former

#4 The Faithful REMNANTS - . their spirituality (daniel 9). we admire extemporaneous playing of the jazz musicians we

Characteristics of the study - . it is a qualitative study to examine the issue of club drug use among men who have sex

The Characteristics of Romanticism - Romantic poets and the love of nature. percy bysshe shelley (1792-1822)prometheus