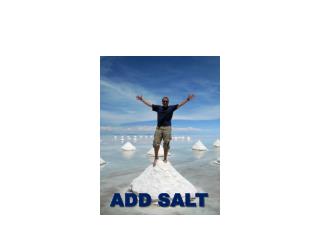 ADD SALT. Matthew 5:13. “You are the  salt  of the earth. But if the  salt  loses its  salt iness, how can it be made  salt y again? It is no longer good for anything, except to be thrown out and trampled underfoot. WHY IS SALT IMPORTANT?. Why Do We Add Salt to Ice? - When you are making ice cream , the temperature around the ice cream mixture needs to be

Let us add some salt to your brake pad purchase! - In the vehicle field, brakes play a predominant role without any

ADD - . the curse of distraction. what is add?. add is also known as attention deficit disorder add is physcological term