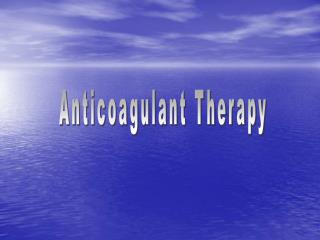 Randomized Evaluation of Long-term anticoagulant therapY - . dabigatran compared to warfarin in 18,113 patients with

ANTICOAGULANT - . definition of anticoagulation. therapeutic interference (&quot;blood-thinning&quot;) with the

ANTICOAGULANT DRUGS - Clotting process . formation of a blood clot (thrombus) in blood vessels or the heart. may be life

Anticoagulant Drug Information - . anticoagulants are prescribed to patients who are at an increased risk for developing