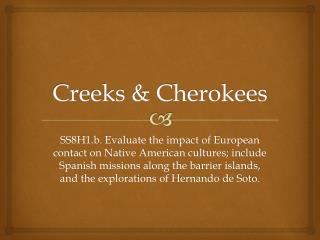 Creeks & Cherokees. SS8H1.b. Evaluate the impact of European contact on Native American cultures; include Spanish missions along the barrier islands, and the explorations of Hernando de Soto. From Mississippian to Creek. Caddo - . caddo native americans. the caddo were farmers who lived in east texas. there were two main groups of the caddo

NPDES Stormwater and the Town of Wrightsville Beach - . stormwater 101. why worry about stormwater?. what is stormwater?

Friday 3/7/14 CONGRATULATIONS LADY CHEROKEES  ! - . science starter: list the stages of the cell cycle. what are we

Thursday 3/6/14 CONGRATS LADY CHEROKEES! - . science starter: describe how mutated white moths could be a disadvantage in

Water Quality Monitoring on Pleasant Grove and Curry Creeks: What the data is telling us - . presented by: edmund

Fish and Wildlife Population Ecology: The End Game… - Okaloosa darters… how are they doing? choctawhatchee bay

Fish and Wildlife Population Ecology: The End Game… - . okaloosa darters… how are they doing?. choctawhatchee bay