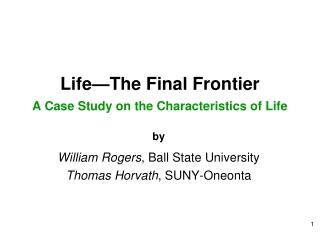 Life—The Final Frontier A Case Study on the Characteristics of Life. by William Rogers , Ball State University Thomas Horvath , SUNY-Oneonta. CQ1: Do you think life exists elsewhere in the universe besides planet Earth?. A: Yes B: No. Photo courtesy of http://hubblesite.org/. The Characteristics of Life - . what is the name of the science that studies living or once living organisms?. biology.

Review for Accelerated Final Exam - . what is biology?. the study of life. bio means life ology means the study of. what

Life on the Frontier... - Life on the frontier. the following slides show actual families and their homes on the

Life in a Frontier State - . unit 7, section three notes. texas as a state. texas joined the united states in 1845. by

Life on the Frontier... - Life on the frontier. the following slides show actual families and their homes on the

A New Frontier: Life of the Early Settlers - . settlers arrived in the new colony of jamestown, virginia in 1607 and

Biology: The Science of Life - . the characteristics of life. what is an organism?. an organism is anything that has or

AP Biology Unit 1 A View of Life - . characteristics of life rarehog. reproduction—life only comes from life

THE CHARACTERISTICS OF THE 6 KINGDOMS OF LIFE - . alive?. to be considered living, an organism must… contain all 7