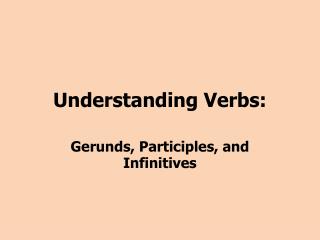 -go Verbs - . there is a small but very important group of verbs that we call the “-go” verbs. these verbs are:

Verbs - . verbs. a verb shows action. there’s no doubt! it tells what the subject does, like sing and shout! action

Chapter 4: Verbs - . action verbs linking verbs helping verbs. what is a verb?. a verb is a word used to express an

Verbs, verbs, and nothing but verbs - . what is a verb?. a verb (from the latin verbum, meaning “word”) is a word

MODAL VERBS - . by fernando santiago and jose luis lÓpez. what are modal verbs?. modal verbs are unusual verbs that

Linking Verbs/Helping Verbs/Being Verbs - . action verbs. the main word in the predicate of a sentence is a verb. verbs

Verbs, Verbs, and More Verbs! - . everything you wanted to know about verbs but were afraid to ask! by mrs. marilyn

Omitting To Be Verbs - . problem: weak verbs-- verbs such as &quot;to be&quot; verbs and

AUXILARIES - . by: kristina yegoryan. what is an auxiliary?. auxiliaries are verbs that are used with other verbs to make

Understanding Verb Forms - . what are the principal parts of verbs? regular verbs irregular verbs review a review b. what

Verbs - . that’s what’s happening!. recognize a verb when you see one. verbs are a necessary component of all

VERBS - . verbs are doing words or actions. you cannot create a sentence without a verb so knowing how they work is

Vivid Verbs - . many verbs are over-used and boring. vivid verbs are descriptive verbs substituted for those boring

All About Gerunds, Participles, and Infinitives - . mrs. wishart’s 8 th grade language arts class. review: what is a