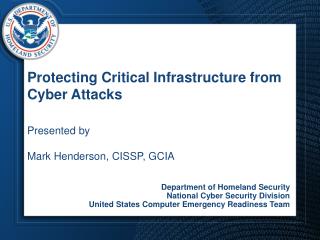 Webinar on Internet of Things(IoT): The Next Cyber Security Target - We are in the age of cyber crimes and just getting

Bots and Botnets The Automation of Computer Network Attacks - . written and researched by david dittrich the information

How to Use NIST SP 800-16 “Information Technology Security Training Requirements: A Role- and Performance-Based