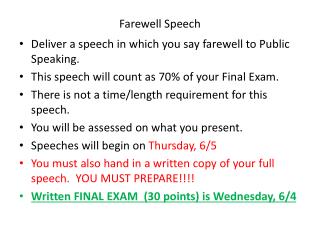 Farewell Speech . Deliver a speech in which you say farewell to Public Speaking. This speech will count as 70% of your Final Exam. There is not a time/length requirement for this speech. You will be assessed on what you present. Speeches will begin on Thursday, 6/5

Introduction to the Course and to Speech Synthesis - . julia hirschberg. applications for speech technologies. speech

The Perception of Speech - . speech. speech is for rapid communication speech is composed of units of sound called

A Farewell To Arms - Hemingway. a farewell to arms. ernest hemingway. graduated high school &amp; enlisted as an

Freedom of Speech - . what type of speech is protected and what kind is not protected?. types of speech. pure speech

A Farewell to Arms - . book 3: ch. 25-28 questions. how does the setting, described in the first paragraph, reflect the

Farewell to ICT or evolving ICT into Computing? - . phil bagge code-it.co.uk. lets keep being creative. all pupils are

Farewell to Manzanar - . vocabulary hannah p.1/2. confiscators. to seize by authority the confiscators took away the

Farewell to - . what happened to qualitative = small?. lyn richards http://www.lynrichards.org/. a fiery horse with