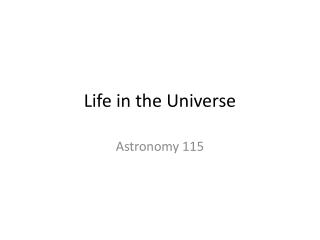 Life in the Universe. Astronomy 115. What is Life?. “ Life is what dies when you stomp on it ” -Dave Barry Simple definitions all fail Moves? Grows? Feeds? Reproduces? Best definitions focus on: Self-organizing, complexity, adaptation By Ken Journigan Olympic High Astronomy-Renaissance - . the history of astronomy. warm up. what is a geocentric model of

Physics 270 – The Universe: Astrophysics, Gravity and Cosmology - . the history of cosmology. mythology vs the

Up to now – Cosmology believes that our Universe came/began from nothing. But - Simple physics &amp; new studies

Life, the Universe and GUI Design - . by mike miserendino. 42. what is the question?. where do we start?. requirements.