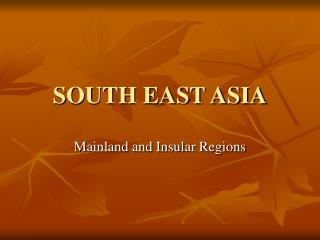 SOUTH-EAST ASIA: - . from prehistory to 1450 ce. the region. the land peninsulas indo-china malay or krat archipelagos

Internship South East Asia - Looking for an internship in japan? then you are at the right page! intern in japan arranges

Place: South East Asia - Account for the cause of ‘underdevelopment’ in cambodia. justify your answer by referring to

ACRE South-East Asia - . historic climate records and their recovery in malaysia. the rochester, 1709. the racoon,1864.

South, Southeast, and East Asia - . physical geography. mountains. mountains are important in asia because they

Polynesia and South East Asia - . se asia- economy- classical time period. most regions were either based on agriculture

South, Southeast, and East Asia - . physical geography. land and sea. the peoples republic of china makes up about 80% of