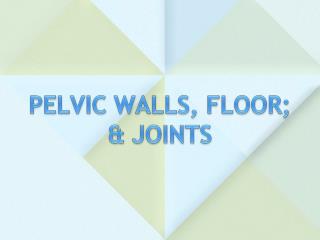 PELVIC WALLS, FLOOR; & JOINTS. PELVIC WALL. The pelvis is the region of the trunk that lies below the abdomen. Although the abdominal and pelvic cavities are continuous, even the two regions are described separately. . The Pelvis. The Skeletal System (Bones and Joints) - . anatomy &amp; physiology i chapter 7. bone as a tissue. osteology – the

STATE OF CONNECTICUT DEPARTMENT OF CHILDREN AND FAMILIES - . intro to child trafficking in connecticut. overview.

How to Spread the Knowledge of Physics Beyond the Walls of the Classroom - . … and still get tenure. scientists in the

Upper Extremity Joints - . sternoclavicular joint. proximal end of clavicle with the manubrium of the sternum a

Joint Mechanics &amp; Joint Injuries - . with ms. moonah. what’s a joint?. joints are the points of contact between