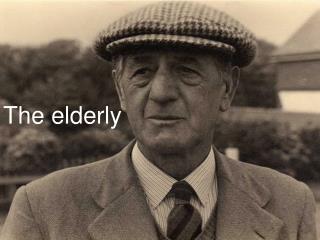 The elderly. Aging. Aging - the process by which human behavior alters with time Wisdom and judgment become more acute and powerful. Fifty is a crucial age in determining the brain’s pattern of aging

The Elderly Population in Maryland - . data from the 2000 census and projections. maco summer conference, august 14 th ,

Portrayal of the elderly - . modernization theory and the loss of status among the elderly. transition from traditional,

A Pilot for the Elderly - . - listening to elderly help-line users in collaboration (integrated care). rebecka arman,

Pharmacology in the Elderly - . pharmacological challenges in the elderly. pharmacokinetic changes pharmacodynamic

Designing For The Elderly Residential design for the elderly and development trends. 設 計爲了長 者 - 長者住

The Elderly - Matt fleekop. the elderly. physical activity and life cycle. only 25% of elderly report being physically

Geriatric Emergencies - . topics . demographics of the elderly the aging process assessment &amp; management of the