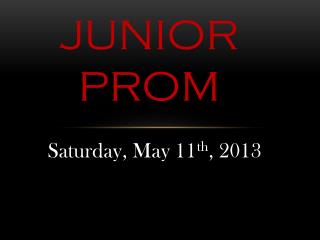 Mainland Regional Junior-Senior Prom - . by: jessica krachman. on june 5 th , the junior-senior prom will be held at the

Prom Prom Tickets Prom Decorating - . prom king and queen:. nominees must attend prom in order to win. if someone who is

Prom ? - . by laura loera period 6. prom survey introduction. i chose this subject because prom is around the corner. i

Prom - . by: dominique joiner. the dress. a ivory short lace prom dress. this dress i would totally wear, it is sooooo

Prom - . what is prom?. prom is a formal dance held for third grade high school students, before graduation. what do

Prom Venues in London | prom Organisers - Planning prom or a university ball? we are the uk #1 prom organisers & help