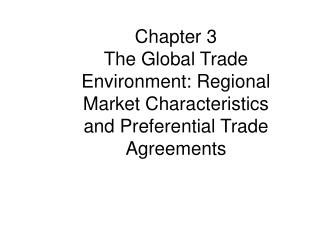 Trade Agreements - . unit 2 activity 10. gatt - general agreement on tariffs and trade. each agreement was called a round

The Global Trade Environment - . module 3. theory of comparative advantage. “even if a country is able to produce all

Trade Programs and Trade Agreements - . listed in the general notes lets look at the handout and the resources section of

Preferential Trade Agreements and Regional Integration in the Arab World, - Libya – tunisia : a priviledged axis for