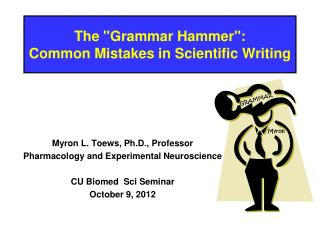 Common mistakes - . please don’t take offense if examples are taken from your report. 1 ma but not: 1ma 10.5

Common Mistakes - . made on essays…. spelling and conventions. past vs. passed aloud vs.allowed weather vs. whether

Common Grammar Items - . neither the girls nor the boy (is/are/was/were) eating the cake now. for ‘neither…nor’

Common Mistakes in Stories - . where-were eg: holly ran to the coast were there were thousand of different rocks. the

Common Mistakes - . by carrie schroeder. emission factors. where did they come from? how old are they? if you changed it

Writing mistakes - . jr1 blue c2. example for checking. the cat is in the tree, it is not climd down the tree. there is a

Common Mistakes - . in research papers. no first person: i, me, mine, we, us, ours. no contractions: they’re, we’re,

Common Mistakes - . understanding of basic concepts displacement is a comparison between final and initial positions go