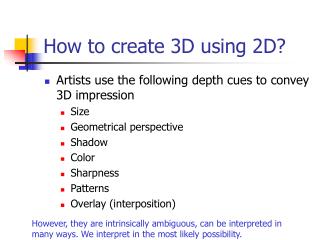 How to create 3D using 2D?. Artists use the following depth cues to convey 3D impression Size Geometrical perspective Shadow Color Sharpness Patterns Overlay (interposition). However, they are intrinsically ambiguous, can be interpreted in How to Create Surveys to Read Your Audience's Minds - How do you know exactly what your audience wants? ask them!

Content Marketing: Get Trained Up! - We all create content. but most of it is simply awful. no one wants to call

Schoolnet I - . welcome instructor:. learning goals. at the end of this workshop, you will understand how to: create,

Create an interactive digital product using programming logic - . objective. the objective of this lesson is for each

How to Create a 100+ Year Company - . overview. there are some timeless principles to building a great company. apply