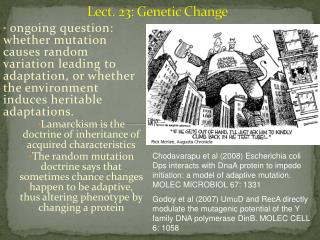 Lect. 23: Genetic Change. ongoing question: whether mutation causes random variation leading to adaptation, or whether the environment induces heritable adaptations. Lamarckism is the doctrine of inheritance of acquired characteristics

Gene Mutation vs Aneuploidy (competing theories of cancer) - “wherefore by their fruits ye shall know them.” jesus,

Microevolution - Changes in the genes of populations - . macroevolution. the appearance of new species over time

Mutations and Genetic Change - . section 14.1 page. 319-324. what are mutations ?. mutations are changes in the structure

Genetic mutations - . a mutation is a her i ta ble change of the genetic material geneticists recognize three different