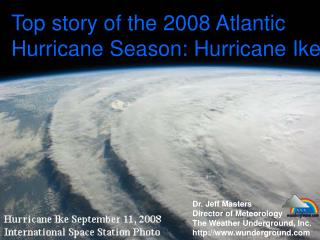 What if Rita had hit here - Most active atlantic hurricane season of record - 28 tropical/subtropical storms ... category

Hurricane Preparation - . you are the person most responsible for your safety!. hurricane preparation. after a major

Hurricane George - . september 15, 1998 to october 1, 1998. george was the second deadliest and strongest hurricane

H urricanes - . by carson park mrs. cherry, 2 nd grade. what is a hurricane?. a hurricane is a powerful storm. a

THE ATLANTIC HURRICANE SEASON SUMMARY – 2009 - Antigua and barbuda, the leeward islands and the british virgin