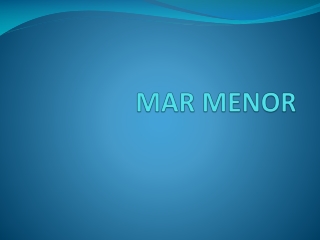 MAR MENOR. Mar Menor  ( little sea  or  small sea ) is a salty lagoon, in the south-east of the autonomous Community of Murcia, in Spain, separated from the Mediterranean sea by La Manga, a sandbar 22km in length and with a variable width from 100 to 1200m.