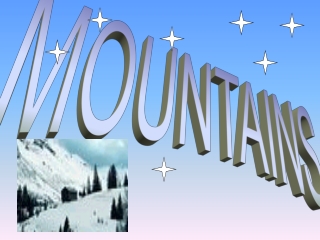 MOUNTAINS. What are mountains?. Mountains are parts of the landscape with steep slopes that rise 300 metres or more above their surroundings. Mountains of the world - . by: eleanor joyce city of salem schools. which letter represents the himalayan mountains?.

Faith that Moves MOUNTAINS - . faith that moves mountains. how can we say that our faith can move mountains? or how can

Objectives - . classify mountains according to how they are formed. describe the himalaya mountains. explore the

Regions Of Texas! - . four natural regions of texas. mountains and basins. this region is the furthest west in texas . .

TYPES OF MOUNTAINS - . chapter 11.2 pages 314- 316. mountains. the collection of processes that produce a mountain belt

Canada's Climate Region Mountains - . by: amy-lee bryan. climate . on the mountains, the temperature decreases with

Mountains - Topic seven:. mountains. most mountains are large areas that have been uplifted due to the movement or

An Introduction to Mountains - . “any part of a land mass which projects conspicuously above its surroundings”

Mountains, Desserts and Rainforests - . by ben carr. mountains are large formations from when the earth was created. the