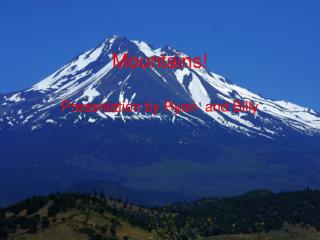 The impact of mining activities and heavy metal pollution in the Apuseni Mountains, Romania - Balwois conference – 25,

The Seven Geographic Regions of Washington State - . the six geographic regions of the pacific northwest. 1) coastal 2)

History 11 - . india . the land of india . india is separated from the rest of asia by the himalaya mountains the highest

Kansas History Review - . chapters 1-12. what forms kansas’s only natural border: a. the atlantic ocean b. the

zoogeography - . what is the maximum range of an organism? abiotic limits ; temperature, oceans, mountains biotic limits;

Thunderstorms - . chp 13.1. orographic thunderstorms. air that is forced up by a mountain or hillside as air strikes the