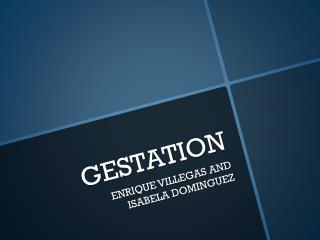 GESTATION . ENRIQUE VILLEGAS AND ISABELA DOMINGUEZ . A fertilized egg is called a Zygote (which is the cell formed by the union of male sex cell and female sex cell). Later on, the zygote keeps dividing and dividing until it becomes into a spherical shape, which is the morula . Gestation - . the period of fetal development beginning with fertilization and ending with parturition. leonardo da

Gestation - . by : carlos daniel caicedo &amp; carlos eduardo calle 10°c. what is gestation ?. gestation is when a

Gestation and Parturition - . gestation. length of pregnancy. begins with fertilization and ends with parturition

Gestation and Birth - . gestation. gestation is the period of carrying an embryo or foetus inside the female (pregnancy).

Gestation Stall: Should it Be Changed? - . by: john jacobs english 250 section rn. what is a gestation stall?. holding