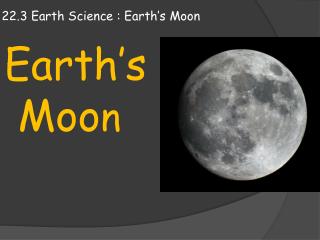 The Earth and Moon - . by: madeline osborn. the size. moon. earth. the earth is 12,742 kilometers in diameter. about four

EARTH, MOON &amp; SUN - . write everything in blue. earth’s rotation. the earth’s axis is an imaginary line that

Lesson 3a - . properties of the moon. comparison to earth. the moon’s radius is 27% that of the earth (about one-fourth