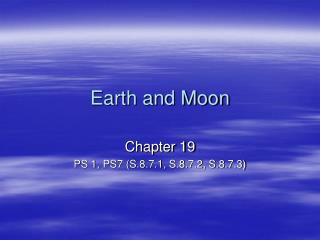 Earth and Moon - . by: sam foreman. weather and atmosphere. the moon does not have an atmosphere ,unlike earth. earth has

Moon and Earth - . by: robert brown. moon landforms/craters earth. there are mountainous regions called highlands. there

Earth and Moon - . our home and our nearest neighbor. earth-moon system. distance from the earth to the moon: 384,000 km

Earth and Moon CHARACTERISTICS - . by daniel torres. size of the earth and moon. size of earth. size of moon. the moon is

Earth and Moon Statistics - . by the lunar and planetary institute for use in teacher workshops.

Earth and Its Moon - . chapter 3. 3-1 the earth in space. earth rotates on its axis axis = imaginary line from north pole

Earth, Moon, and Beyond - . day and night. the sun is the star at the center of our solar system. it gives off energy.

Earth, Moon, and Sun - . chapter 19. voting questions: how many of you……. would like to live where it is dark all the