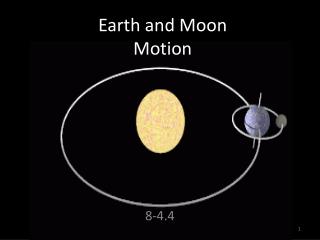 Earth and Moon Motion. 8-4.4. Learning Objectives. 8-4 You will be able to demonstrate an understanding of the characteristics, structure, and predictable motions of celestial bodies. 8-4.4

Moon Phases - . the revolution of the moon around the earth causes the moon to appear to have phases . why does the moon