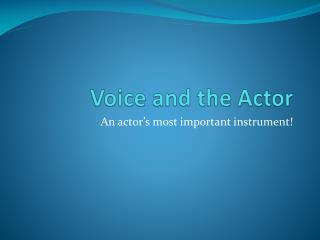 Voice Browsers - . generalmagic demo. making the web accessible to more of us, more of the time. sdbi november 2001,

Presbylaryngis: The Aging Voice - . by karen vanderploeg. prevalence/age of onset. the san diego center for voice and

Voice Lessons…Diction - . diction (word choice) is the foundation of voice and contributes to all of its elements. by

Acting for Camera - . theatre v s camera. how are they the same? how are the different?. in both an actor’s primary

Active and Passive Voice - . what is active voice?. active voice is used when the subject of a sentence performs an

An Actor Prepares : - . how to treat your voice before taking the stage gretchen mcginty , ma, ccc-slp. why should actors