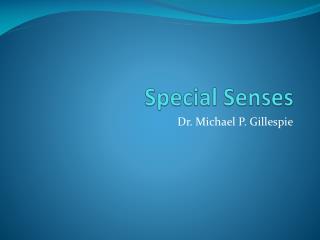 Special Senses. Dr. Michael P. Gillespie. Special Senses. Receptors for the special senses – smell, taste, vision, hearing, and equilibrium – are anatomically distinct from one another. These receptors are concentrated in very specific locations in the head. SPECIAL SENSES - . making sense of the world. sensation. relationship between physical energies in the environment

Special Senses - . week 12 dr. walid daoud a. professor. physiological anatomy of the eye. i- layers of the eye: . outer

Special senses - . two types of peripheral nerve terminals. terminals of axons , which transmit impulses from the cns to

Special Senses - . vocabulary terms: review. stimulus - anything from inside or outside the body that can cause a