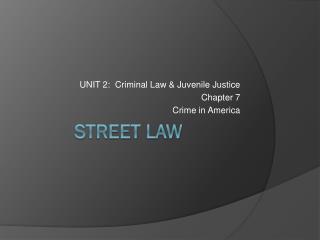 Street Law - Contracts. street law. do now. list the things you think you would need to have in a contract for it to be

STREET LAW - . chapter 1: what is law. what is law. rules and regulations made and enforced by government that regulate

STREET LAW - Unit 1: introduction to law and the legal system chapter 1 what is law?. street law . unit 1 provides a

Street Law Review - . chapters 1-6. the study of law. what is jurisprudence?. true or false? the universal declaration of

STREET LAW: Miranda rights - . entry task. describe a time when someone wanted to talk about something or asked you about

Street Law: Traffic Infractions - . by ryan yoke. what are traffic infractions?. an “efficient” method of traffic

Street Law: A Course in Practical Law - . chapter 2 lawmaking. legislatures. the us congress is made up of two houses :