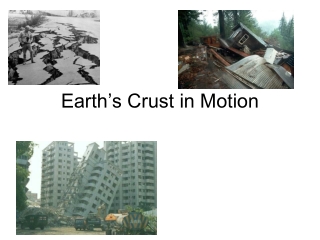 Earth’s Crust in Motion. Long Island Earthquake!!. http://www.youtube.com/watch?feature=player_detailpage&v=STsn_esGbVM. When the Earth’s plates are in motion, earthquakes may occur. Tier Word Motion-movement. STRESS. The movement causes stress in the crust.