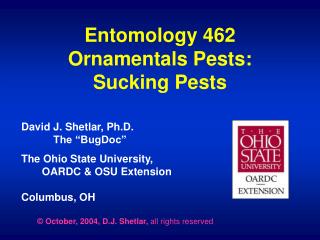 Pests and Diseases - . 28.00: examine distinguishing characteristics of pests so as to determine best management

Lecture 23: Trade and pests - . key points: trade and pests. id the below three species cpb swd bmsb what is the

Controlling Insect Pests in the Garden - . dr. monica valentovic and dr. gary rankin. control of pests is a decision

DO NOW - . so far in our green house we have encountered two different pests. describe the two and how did we get rid of

Common Pests &amp; Diseases in Maize - . maize zea mays. maize  is used both for human as well as animal consumption

Insect Pests and Management - . objective: identifying and scouting for common insect pests encountered in the garden and