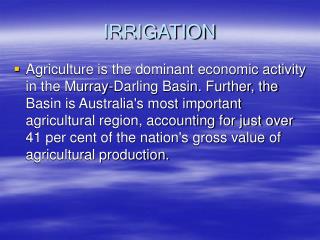 IRRIGATION. Agriculture is the dominant economic activity in the Murray-Darling Basin. Further, the Basin is Australia's most important agricultural region, accounting for just over 41 per cent of the nation's gross value of agricultural production. LANDSCAPE IRRIGATION - . irrigation in a water scarce environment. 1. how much water is enough? 2. irrigation design 3.

Lawn Irrigation - Having healthy and greenish lawn is everyone’s desire. a beautiful lawn in front of our properties