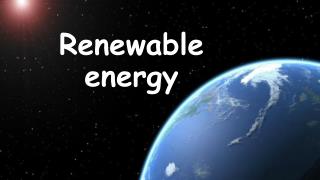 Renewable energy. Energy exists freely in nature. Some of them exist infinitely (never run out, called RENEWABLE), the rest have finite amounts (they took millions of years to form, and will run out one day, called NON-RENEWABLE). When can energy be called 'Renewable'?. Renewable Energy - . renewable resources can be replaced quickly as they are used up. make up about 10 % of our

Renewable Energy - . chapter 18. shift from oil to hydrogen fuel. will be used to produce electricity, to run cars

Renewable energy - . by:sebastian.b.v. central idea. in the context of the problem that fossil fuel is declining and that

Energy Efficiency and Renewable Energy - . chapter 16.3-16.9. 16-3 what are the advantages and disadvantages of solar