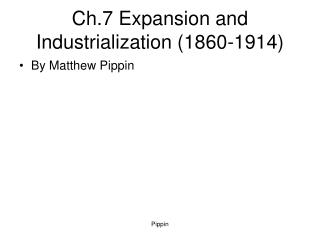 Sectional Conflict Intensifies 1848 - 1860 - . leading up to the civil war. characterizing the times. when the nation

AP U.S. HISTORY Unit 4 Notes - . expansion and reform. focus on when you read:. trace the history of westward expansion

1. Growth of Industrialization----1865 to 1900 Why? Factors in place Railroad industry Distribution System Symbol of gr