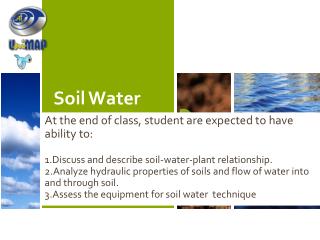 Soil Water. At the end of class, student are expected to have ability to: Discuss and describe soil-water-plant relationship. Analyze hydraulic properties of soils and flow of water into and through soil. Assess the equipment for soil water technique. Outline. Water and Plant Growth Soil Erosion: Water Moves Soil! - . horizon “o”: organic layer all soils do not have this found beneath vegetation