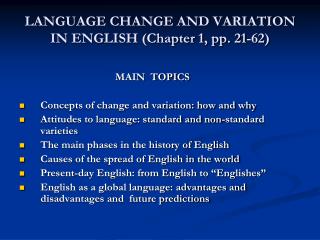 LANGUAGE CHANGE AND VARIATION IN ENGLISH (Chapter 1, pp. 21-62). MAIN TOPICS Concepts of change and variation: how and why Attitudes to language: standard and non-standard varieties The main phases in the history of English

Activity one language change and use - This powerpoint document is made for teaching use only. any commercial use of it

How we think the English language is going to change - . by ben grindey, cameron mitchell, hamilton mckenzie-phillips.

Language Variation - . sociolinguists today are more concerned with social variation in language than with regional

Name That Language Change! - . based on the situations presented, determine whether the language change in english was

The Origins and Development of the English Language Chapter 4: The Backgrounds of English - . john algeo and thomas pyles

Standard English and AAVE - . this lesson borrows heavily from peter trudgill’s paper “standard english: what it