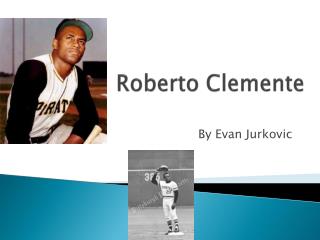 Roberto Clemente. By Evan Jurkovic. Early Life. Was born in Carolina, Puerto Rico The youngest of seven siblings Had to work to earn money by delivering milk Took interest in baseball early on and often played Roberto Clemente: A Bittersweet Memoir - Crypt. the pope's casket was placed in a special crypt for visitors to see.. . .

We Will Never Forget You, Roberto Clemente - . day 3. what did the owner of the plane do to try to solve the problems

Vocabulary for “We’ll Never Forget You, Roberto Clemente” - . week 8. error. a mistake in thinking or in

By: Clemente Rendon - . about tca. founded in 1935 by jc thompson membership count of approx 400 website:

Amazing Americans - . click on a picture to learn more about the person. click on the home button to return back to this

ATHLETE PROJECT - . in this project you will talk about your favorite athlete: 1 st – choose an athlete you would