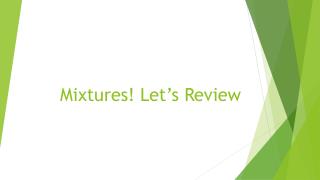 Mixtures and Solutions Investigation 8 - . date: 10/13/14 lt: i can distinguish between mixtures and solutions. sponge:

Absorption and Stripping of Dilute Mixtures - . absorption and stripping are common methods for causing mass transfer of

SOLUTION CHEMISTRY - . i. mixtures:. mixture = a blend of two or more kinds of matter, each of which retains its own

MIXTURES INVOLVING WATER - . three types suspensions colloids solutions. the difference among these is the size of the

CPHIMS Review Course - . • purpose: get comfortable with the exam’s material and format evaluate your preparation

The Big Review - . a chronological/thematic review of us history. how to use this review. to review a time period: you

Substances, Compounds &amp; Mixtures - . how everything is put together. substances. matter that has the same