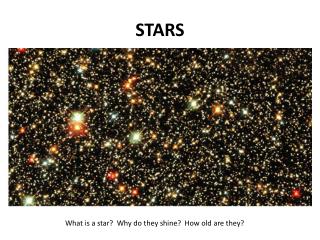 STARS. What is a star? Why do they shine? How old are they?. Stars shine for millions to billions of years, much longer than a human lifetime. Yet, we've been able to piece together how stars are born, shine and eventually die. Stars - What is a star? the objects that heat and light the planets in a system a star is a ball of plasma held together

Stars - . what are stars?. stars are balls of hot gas. they are much larger than planets and much further from earth. the

STARS - The universe. stars. stars. object in space that gives off its own light all sizes closest star to earth is the

STARS - . student tracking alert retention system. keys to academic success module 2. there is an academic hold on my

STARS - . characteristics of stars. groups of stars that form patterns in the sky are called constellations example:

Stars - . the brightness of stars - star: a luminous sphere of gas with enormous mass, that produces energy by

Stars - . luminous gaseous celestial body – spherical in shape held by its own gravity. how do we study stars?.

Stars - . mrs. breeding 6 th grade. what is the difference between a star and a planet?. when we look up at the night

Stars - . the brightness of stars - star: a luminous sphere of gas with enormous mass, that produces energy by fusion.

Stars - . stellar radii stefan-boltzman law measuring star masses. how to measure the size of star?. if we know the

Stars - . what are stars made of?. planets – solids (rock, ice) or gas stars are made from the fourth state of