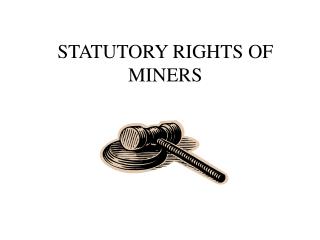 STATUTORY RIGHTS OF MINERS. Section 2 of the Findings and Purpose of the Mine Act contained the following Declarations from Congress:. The first priority and concern of all in the coal or other mining industry must be the health and safety of its most precious resource – the miner Miners Rights - . rights &amp; responsibilities under the mine safety &amp; health act of 1977. nc dol mine

Miners Rights - . rights &amp; responsibilities under the mine safety &amp; health act of 1977. mine safety

Miners’ Rights - . the miners’ rights and responsibilities under the federal mine safety and health act of 1977.

Statutory Interpretation and the protection of Human Rights - . module six. human rights protected by:. the courts –

BREACH OF STATUTORY DUTY - . a tort in its own right. a complex area of law involving number of propositions. . claims

Mourning the miners - Thirty-three miners were confirmed dead after a coal mine blast in the rebel-held city of donetsk,

Unit 4: Miners - . the decade of the 1850’s. slow-fur trade was over and there were few settlers uncertain-no mines

Rescue the miners - . 3) who are the miners? 4)how are they being rescued?. how have they lived in the mine? their first

Statutory compliance of HR - Statutory is the term for different laws, and compliance is when you follow or comply with