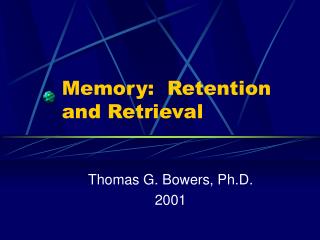 Memory: Retention and Retrieval . Thomas G. Bowers, Ph.D. 2001. What Is Memory? . Some claim it is the exact neurological trace, even though it may not be obtained on attempts at recall Penfield (1959) has been cited for this view

Memory - . memory - the persistence of learning over time through the storage and retrieval of information. example –

Memory - . encoding, storage &amp; retrieval. memory. persistence of learning over time via the storage and retrieval

Memory - . scientific frontiers memory videos how does memory work (1-5). how many objects can you remember?. memory. the

Memory and Forgetting - . * memory : “the ability to recall information . it is very closely related to learning. the

Day 5: Thought, Memory and Recovered Memory - . human memory: basic questions. how does information get into memory? how

Ch. 7 Memory and Thought - . memory and thought. the storage of retrieval of what has been learned or experienced is

Week 3 - . memory &amp; information processing. the nature of memory what is memory? n memory n the retention of

Myers EXPLORING PSYCHOLOGY 5th Ed - Memory. memorypersistence of learning over time via the storage and retrieval of