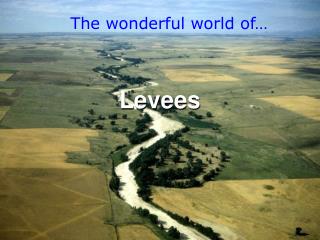 The wonderful world of…. Levees. Everything you need to know about them. What are they?. Often several metres higher than the river’s floodplain, they are high natural embankments of silt situated close to the river channel. Where are they found?. Levees - . by nathan johnston. what are levees?. a levee is a type of dam that runs along the banks of a river or canal.

Levees - . artificial levees prevent floods usually made with fine-grained sediments that are easily eroded in floods

Canals and Levees - . canals. an artificial waterway constructed to allow the passage of boats or ships inland or to

WHEN THE LEVEES BROKE - . by: alayna morales. the key issue. the main issue in this film was the natural disaster

Fort Bend County Levees: Preparing for Emergency Actions - . levees in the united states…. the magnitude of levees in