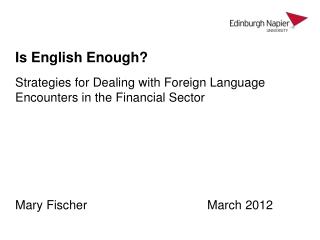 Is English Enough?. Strategies for Dealing with Foreign Language Encounters in the Financial Sector Mary Fischer March 2012. The Research Context. Languages in Multinational Companies English as a Business Lingua Franca Why Language Policies are important English Intonation – its Structure &amp; the Use - English pronunciation practice a practical course for students

Lesson Three - . pub talk and the king's english. aims. to learn the methods in developing an expository writing,esp. the

Grammar English 9B - . updated 2010. questions on the english portion of the act test fall into two categories:.

The Origins and Development of the English Language Chapter 4: The Backgrounds of English - . john algeo and thomas pyles