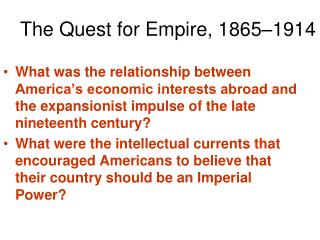 The Quest for Empire, 1865–1914. What was the relationship between America’s economic interests abroad and the expansionist impulse of the late nineteenth century? What were the intellectual currents that encouraged Americans to believe that their country should be an Imperial Power? . The Role of Shaka In The Rise of the Zulu Empire - . abigail andrews. outline. introduction the bantu migration settling

The Causes of WW1 - . m ilitarism a lliances i mperialism n ationalism. militarism 1. germany was competing with the uk

3/6 – Medieval Europe and Byzantine Empire - . aim: what happened to western europe after the fall of the roman empire?

The Causes of WW1 - . m ilitarism a lliances i mperialism n ationalism. militarism. germany was competing with the great

The Byzantine Empire - . in this lesson, students will be able to identify significant characteristics of the byzantine

Three Aging Empires The Holy Roman Empire The Ottoman Empire Poland - . the objectives of this slide show will be :.