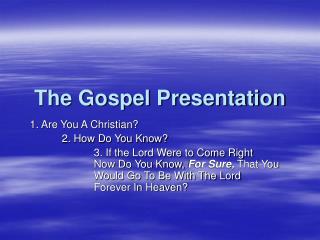 The Gospel Presentation. 1. Are You A Christian? 2. How Do You Know? 3. If the Lord Were to Come Right Now Do You Know, For Sure, That You Would Go To Be With The Lord Forever In Heaven?. I John 5:13. Gospel Presentation - . press f5 to begin slideshow www.valerieknies.com. man has sinned. romans 3:23, for all have

Gospel Presentation - . by: will kenner. matthew 17

the Gospel - . what does a person need to know to get to heaven? how can a person have a relationship with god?. key

What makes the Gospel- The Gospel ? - . i am astonished that you are so quickly deserting him who called you in the grace

The Gospel - Speaking god’s message. the gospel. the inherent power of god’s word spoken by men. gospel power. the

The GOSPEL - Of. the gospel. matthew. gospel of matthew. history surrounding the book the law, the prophets and the

The Gospel - Is that we are saved from god by god for god to know god. the gospel. understand that. god is not a means

The Gospel - . a series in romans. despite our faithlessness god is faithful. the universal reality of sin. everyone