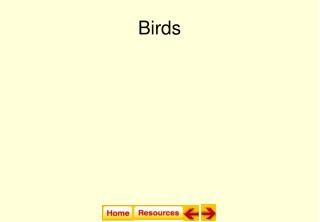 Birds. Kingdom. Kingdom= Animalia Phylum= Chordate Class= Aves. Birds. Ornithology is the study of birds. Birds belong to the class Aves Birds 1 st appeared on the earth about 150 million years ago. There are about 10,000 species of birds in the world. Birds developed from reptiles.

Birds - . “reptiles by another name”. general characteristics of birds. adaptations for flight a ppendages modified

BIRDS - . evolution of birds:. fossil evidence shows that birds evolved from the same line as crocodiles and dinosaurs.