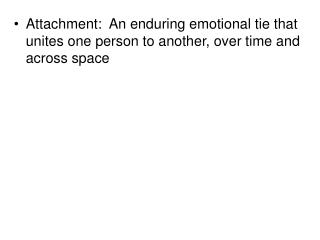 Attachment: An enduring emotional tie that unites one person to another, over time and across space . Attachment Behaviors: Behaviors that function to bring the infant/child physically closer to the caregiver Exs: crying, following, clinging. Why is parent-child attachment important? Attachment in Adolescence: An Agenda for Research and Intervention - . ronald jay werner-wilson, ph.d. based on material

Inherited Traits and Learned Behaviors - . by science doodles. inherited trait :. a characteristic that is passed from

The Muscular System - . muscle attachment sites. muscle exerts force on tendons, which in turn pull on bones or other

Change topic - . enough on proximate causes, interesting and a lot of work. basics: stimulus: effector : in between:

Considering Attachment in the Context of Adoption and Foster Care - . douglas goldsmith, ph.d. executive director the

Patriarchy - How the man is keeping us (women) down. patriarchy. traditional gender roles. masculine. feminine. things