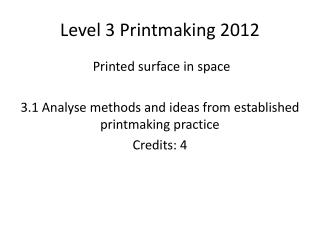 NCEA Level 2 – 91323 Printmaking 2012 - . examples of candidate work. excellence. this portfolio has been verified

NCEA Level 2 – 90479 Printmaking 2010 - . examples of candidate work. excellence. this submission was verified at the

PRINTMAKING - . history and examples. what is a print?. a picture that is produced so that it can be multiplied usually

Printmaking - . what is a print?. print created by transferring ink to paper (or another surface) plate what the ink is

Printmaking - . for making more than one image all the same. hard lino. use a press. you can achieve more detail. design

Printmaking - . * the process of creating a series of artworks from an original design. * printmaking goals are to

Printmaking - . expeditionary project. different types of printmaking. woodcut relief print b/c the image is raised, it