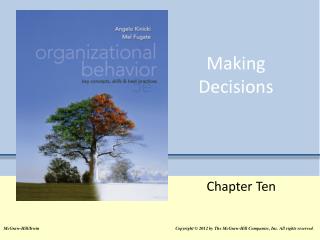 Making Decisions. Chapter Ten. After reading the material in this chapter, you should be able to:. LO10.1 Compare and contrast the rational model of decision making, Simon’s normative model, and the garbage can model LO10.2 Review the eight decision-making biases. Making Decisions - . chapter 2. condition. false. true. if statement. if statements are used to choose between actions a

MAKING DECISIONS - . booleans basic choices “two roads diverge in a yellow wood” - frost “when you come to a fork

Making Decisions - . decision-making skills are something we use every day. factors that can influence a decision . peers

MAKING DECISIONS - Yes. is condition true?. no. making decisions. booleans basic choices (should i stay or should i go?)

Making Product Decisions - . economics, march 2011. remember: we are the supplier, making decisions about what to

Making Simple Decisions - . chapter 16. some material borrowed from jean-claude latombe and daphne koller by way of

Making Effective Decisions - . a 3-part online series session 3 ~ barriers to effective decision making “when you have

Making strategic decisions - . the significance of information management the value of different approaches to decision