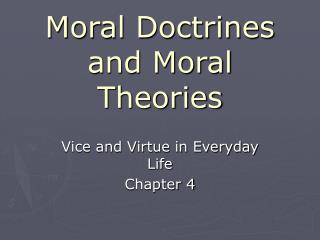 Moral Doctrines and Moral Theories. Vice and Virtue in Everyday Life Chapter 4. The Experience Machine, Nozick. What matters to us, apart from having pleasant conscious experiences? First, we want to actually do certain things. Second, we want to be a certain kind of people. Moral and Ethical Theories - . - john rawls, a theory of

Moral Theories – what you should do - . consequentialist theories (e.g. utilitarianism or rawl’s theory of social

Moral Systems, Ethical Concepts &amp; Theories - . chapter 2. everyone is entitled to his or her own opinion,

Moral Theories influential in history of bioethics - . remember: even though they have had influence – many are very