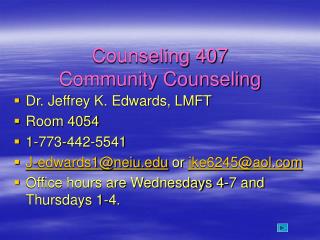 Counseling in Community - . objectives colossians 1: 28-29 28  he is the one we proclaim, admonishing and teaching

Counseling - Welcome del norte nighthawks class of 2018!. inspiring passion and preparing all students to be college

Counseling - . introduction. there are times that the challenges in our lives may lead to isolation, anxiety,

COUNSELING - . 17 november 2012. what is counseling?. is a process that psychologically empowers individuals to seize